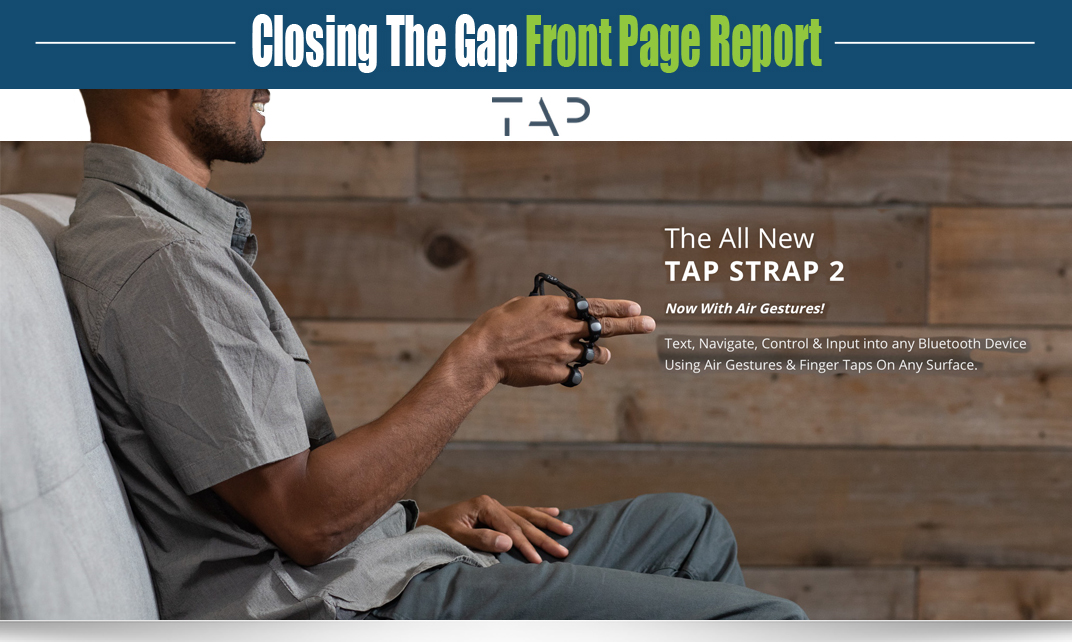 Tap is an integrated wearable that can precisely detect hand motions and finger taps. Tap has a Keyboard Mode in which you can create text by tapping on any surface, a Mouse Mode in which it becomes a 1,000 DPI mouse, and an Air Gesture Mode.

Tap does not require any software drivers – it is a plug-and-play Bluetooth input device that works with everything from phones to tablets, Laptops & SmartTV’s.

Tap works with all of the popular operating systems such as iOS, Android, Windows, Mac & Linux.

The TapMapper tool lets you create, save and share custom maps. You can type in any language, trigger hotkeys and build custom macros. You can download thousands of TapMaps created by users, and upload and share your own Maps.

The new Tap Strap 2 adds an AirMouse Mode, allowing clicking and cursor control just by pointing a finger, and allows virtual swiping on mobile devices. AirMouse can also be used to control media, and navigate menus. 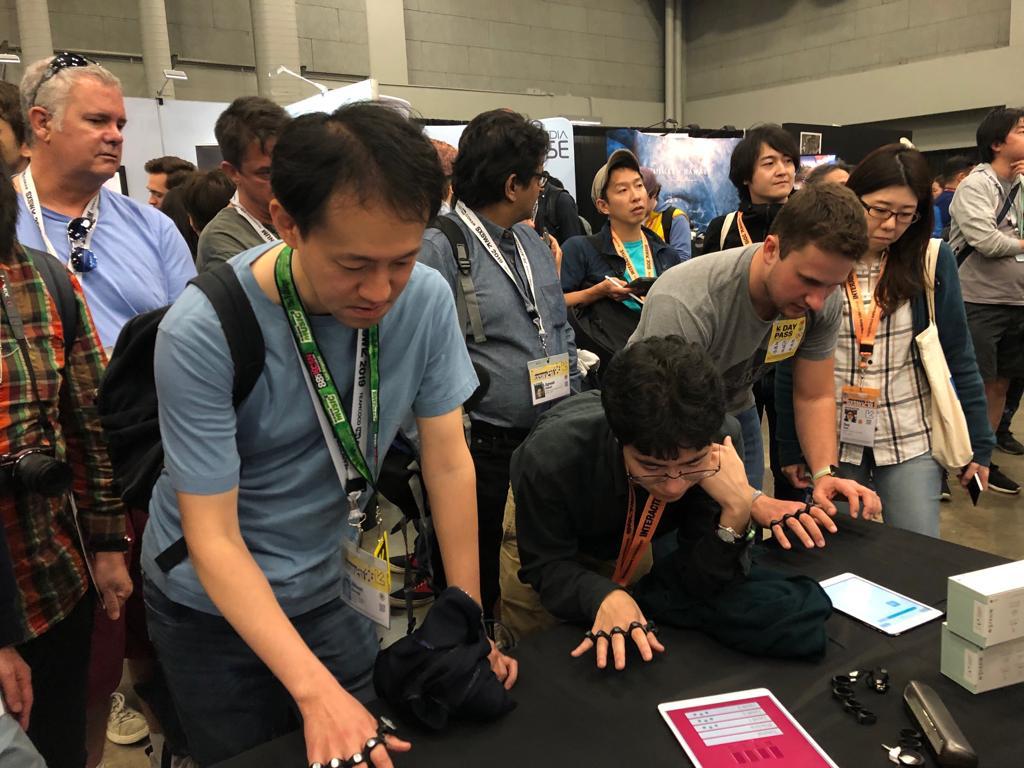 Over the past 2 years, they have exhibited and sold the Tap Strap at trade shows and conferences around the world, from MWC in Barcelona to SXSW in Austin. They have shown Tap to tens of thousands of people – and have a growing community of active users around the world.  At every show, attendees crowd around, waiting their turn to try out this new technology. “Wow, this is amazing!”, “This is the coolest thing in the whole show!, “This is definitely the keyboard of the future”, “If I didn’t try it myself, I wouldn’t believe that it works.”

So what is inside the Tap Keyboard? How does it work? What makes it so new and different than QWERTY? How and why are people using it? Here is an in depth look at what it is, why it is, and how it all works. 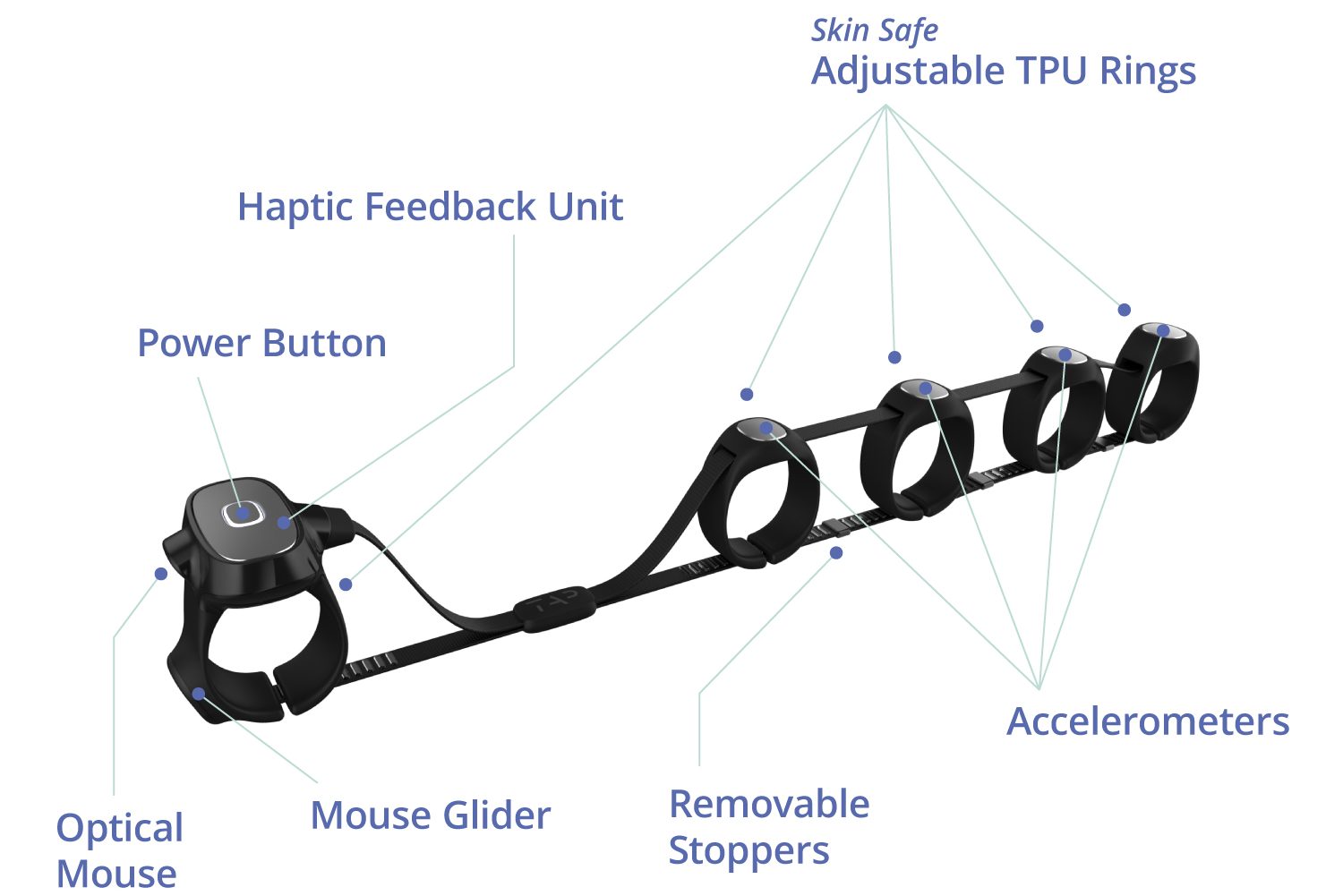 The Tap Strap consists of five flexible rings, connected together by strips of braided nylon. Each ring contains a three-axis accelerometer, and the thumb ring also contains a six-axis IMU, an optical mouse chip, haptic element, battery, and circuit board. The nylon braid contains conductors that bring the signals from the sensors to the circuit board, where an MCU collects the data, derives the tap combination, and transmits the information via Bluetooth.

The Tap Strap operates in three modes that are automatically activated based on the position of the users hand. The default mode is Keyboard Mode. When the user rests their thumb on a surface, Tap switches to Mouse Mode, and when the thumb is lifted, it switches back into Keyboard Mode. When the hand is turned so that it is perpendicular to the surface, (like shaking hands), then Tap goes into Air Mouse Mode, and when the hand is turned parallel to the surface, (the palm is facing down), it switches back to Keyboard Mode.

The tapping motion is similar to playing chords on a piano. Each ‘chord’ corresponds to a character or keyboard command. Some characters – the vowels – require only one finger to tap, while others require multiple fingers to tap at the same time. For example, the most common consonants, N, T, L and S, are tapped with two adjacent fingers. “N” is the thumb and index finger, “T” is the index and middle finger, “L” is the middle and ring finger, and “S” is the ring and pinky.

So, to spell the word, “INTO”, you would tap the following sequence:

To tap punctuation and special characters, you use double taps. For example, to tap a comma, you would double tap the letter M. Since there are two M’s in the word coMMa, it’s a quick way to learn. There are taps for virtually all of the keys on a standard keyboard, and your Tap can also be customized so that you can activate keyboard shortcuts, modifiers and special symbols. 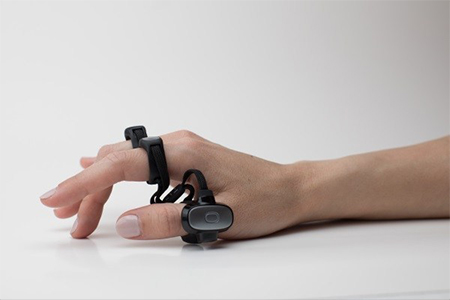 The Tap Strap is also a 1,000 DPI Optical Mouse. A small optical chip is installed in the corner of the thumb ring, which has both a laser and an image sensor. When you place your thumb down on a surface, Tap automatically turns into a mouse. You move the cursor with small movements of your thumb and control the mouse clicks with finger taps. To LEFT CLICK, you tap your index finger, and to RIGHT CLICK, you tap your middle finger. There are clicks for all of the basic mouse commands such as drag-and-drop, and scrolling. When you lift your hand from the surface, Tap automatically turns back into a keyboard for a seamless transition. 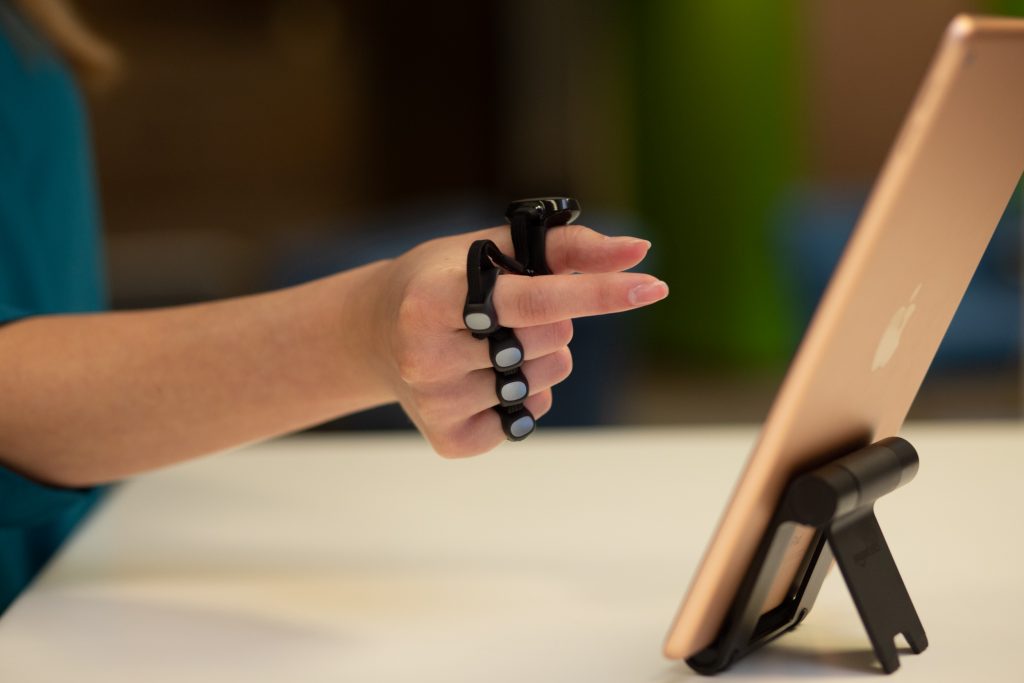 In addition to the 3-axis accelerometers in each finger ring, Tap has a 6-axis IMU in the thumb ring. By using both the accelerometers and the IMU, Tap can determine the motion and orientation of the hand, and the position of the fingers.  When the hand is held in a ‘hand shake’ position, Tap will automatically switch to Air Gesture Mode. Air Gesture Mode works with any Bluetooth device that supports a mouse.

In Air Gesture Mode, Tap can emulate a standard mouse, allowing you to move the cursor by moving your hand, and to activate mouse clicks by extending one finger and flicking right and left.  You can scroll by extending two fingers and flicking in the direction of the scroll. If you are paired to an iOS device, you can go to the Home screen and to the App Switcher by clicking your thumb and index finger together.