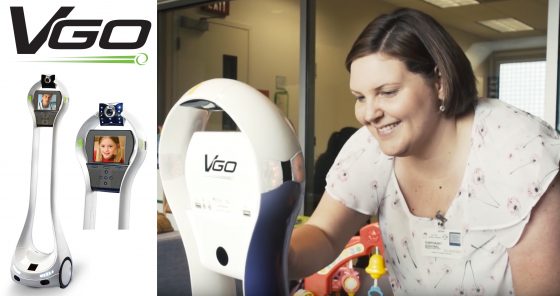 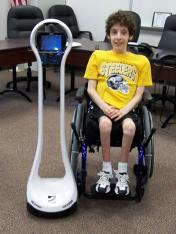 Injuries, extended illnesses, immune deficiencies and other physical challenges prevent a student from  physically being able to attend school. School districts try to accommodate these special needs by working providing on-line courses, in-home tutors, special busing, videoconferencing and more. But these are expensive and very limiting since students miss out on the classroom experience and social life that comes with attending school.  Now, they can participate in classroom discussions and share in the social aspects of locker-side chats, lunch period and moving from class to class. VGo enables students to attend school from a distance At VGo we love putting the spotlight on Lyndon Baty, a high school student in Knox City, Texas who has an illness that requires him to remain at home because of the risk of physically being in class. He’s a perfect example of type of student who benefits greatly by being able to “attend” school via his VGo – or “BatyBot” as its affectionately known at Lyndon’s school. From the safety of his home, in the morning, Lyndon gets on his computer instead of the bus.  He uses VGo to move around school, interact with teachers, chat with his friends between classes and spend the lunch period with them without endangering his health.

Lyndon operates his VGo simply with an internet-connected computer equipped with audio capabilities and a webcam.  VGo runs for a full school day before needing to be recharged. VGo for Remote Students has opened up academic and social environments to other disabled and immune-deficient students as well. There are no longer boundaries between them and the world that was previously inaccessible.

What is VGo? VGo is an all-in-one solution that includes everything you need to establish your physical presence in a distant location. Using their special software application on a PC or Mac, an internet connected person located anywhere, instantly connects to a VGo in a distant facility – giving them the ability to not only interact with the people who are there but also to move around under their own control just like you would if you were there in person.  Some people like to describe VGo as their personal “avatar”. The VGo is 100% remote controlled by the remote person.  The people who are in the same facility as the VGo don’t normally touch it when it’s in use – they treat it like a person. VGo can be shared by a set of people or dedicated to a single person using standard web accounts and permission settings maintained by you, or by someone in your organization- just as applications such as shared printing, email, and instant messaging are managed today. VGo is uniquely integrated with a camera, microphones, and video display – all on a light-weight, motorized, stylish, remote-controlled platform. VGo is optimized at 4 feet tall so it works equally well when interacting with people who are sitting or standing. An accessory raises the height to 5 feet for applications where people are always standing or where you need to have a higher view.  And of course you can look anywhere – up, down, all around. You can move delicately around tight spaces, slowly pan around the room or join a colleague walking down the hall. VGo is battery powered and can run up to a full day between charges. When it’s time to recharge – just click the “Dock” button and VGo automatically positions itself on its charging dock (included). VGo is designed for indoor environments. You can go wherever there’s a WiFi or Verizon 4G LTE network signal (4G connectivity is an optional feature). It can easily be carried up or down stairs, or you can have one or more VGo’s on each floor where a remote person needs to go. When you buy a VGo – everything you need is included – this is what you get:

How Does VGo Work?

VGo’s underlying technology is very sophisticated – but to the user, it’s very simple, no training is required. The remote person brings up the VGo App on their iPad or computer (PC or Mac, clicks on the location they need to visit – and instantly they are there. VGo connects to the network (internet) using WiFi or Verizon 4G LTE service. VGo is continually monitored by a purpose built cloud-computing network (VGoNet) that keeps track of its availability and initiates telepresence upon request by a remote user.  VGoNet uses its intelligence to establish the best connection through the network to provide the highest possible quality.  If both the remote user and the VGo are within an enterprise network, then the data comprising the audio, video and driving controls all stays within that network. 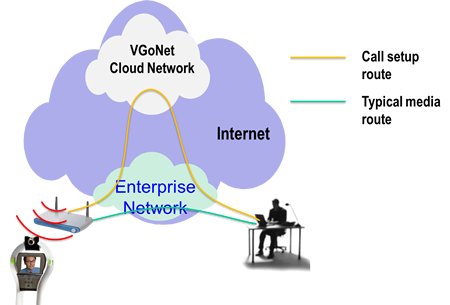 Although the VGo is 100% remote controlled and people who are in the same location as the VGo never really touch it – there’s a lot going on. The upper part of the VGo is what people look at and is where all the audio and video is captured, processed and presented:

The lower part of the VGo is where the motion is generated:

The VGo App, which is used by the remote person to interface with the distant VGo, is simple to use.  There are simple indicators for the VGo’s battery level and also the VGo’s WiFi or Verizon 4G LTE signal strength.  A handful of controls enable you to: 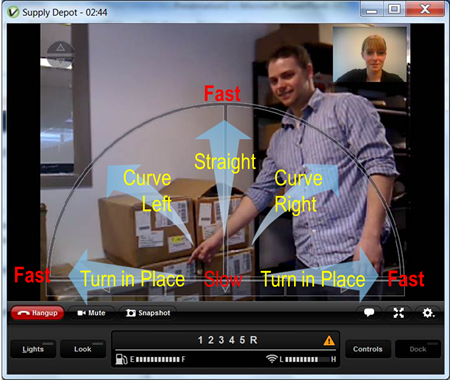 Driving is simple too – just drag your mouse pointer and VGo moves in that direction.  Drag it more and the VGo moves faster.  You can also use the arrow keys on your keyboard.  Tilt the camera using the scroll wheel on the mouse or use your keyboard.